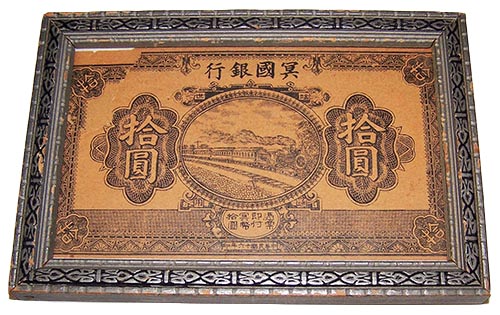 Spirit money, also known as ghost money, is a form of joss paper, an offering used in traditional Chinese ancestor worship.  The burning of spirit money is the last ritual performed by a family member during a traditional funeral ceremony to ensure a favorable outcome in the afterlife.  It is also commonly used in ancestor worship rituals during important holidays.  Burning the money allows for the funds to be accessed by the deceased’s spirit in the afterlife.  Archaeological evidence supports the use of spirit money as early as 3,000 years ago.  The tradition continues today, with the addition of paper credit cards and paper reproductions of all manner of luxury goods.

This example of spirit money, likely printed on rice or bamboo paper, was sent to the United States as the souvenir of a Christian missionary in the late 19th century.  The frame contains the following note from the missionary: “Spirit Money: This $10 note on the Bank of West Haven comes to you from China, a souvenir which bears its own testimony to the need of her millions for a knowledge of Christ and release from the superstitions that bind them. It is a testimony, too, of the effect of the veneer of Western customs without the redeeming Gospel.”

Carla Pena-Vega, a student in Anthropology 190, Spring 2017, conducted the research for this post.