The Museum of Anthropology’s exhibit, Mother Goddess: Fertility Figures of the Ancient Mediterranean is presented in conjunction with Frederic Church: A Painter’s Pilgrimage, on exhibit at Reynolda House Museum of American Art from February 9 through May 13.  The Church exhibition is the first to explore the American artist’s paintings inspired by his travels to ancient sites in the Middle East and the Mediterranean.  More than 50 paintings, oil studies, and drawings from the late 1860s through the early 1880s will be on view.

The most popular artist in mid-19th-century America, Frederic Edwin Church (1826–1900) took landscape painting to new heights of grandeur and was best known for his large, visually stunning paintings of American scenes as well as views of South America, the North Atlantic, and the Caribbean.  But from 1867 until the end of his life, many of Church’s most important paintings represented ancient cities or buildings that he saw during his 1867–69 trip to the Middle East, Rome, and Athens.  While Church’s paintings of the New World focused on the natural world, his works from the Old World explored human history.  The exhibition brings together nearly all of Church’s most important paintings of the Mediterranean region and Holy Land in order to explore this major shift in his artistic practice.

Reynolda House is open Tuesday to Saturday, 9:30am – 4:30pm, and Sunday, 1:30pm – 4:30pm.  For more information and to purchase exhibition tickets, visit reynoldahouse.org. 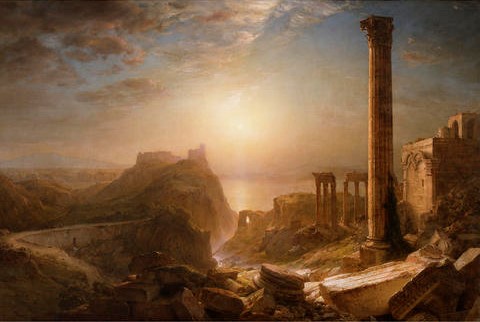