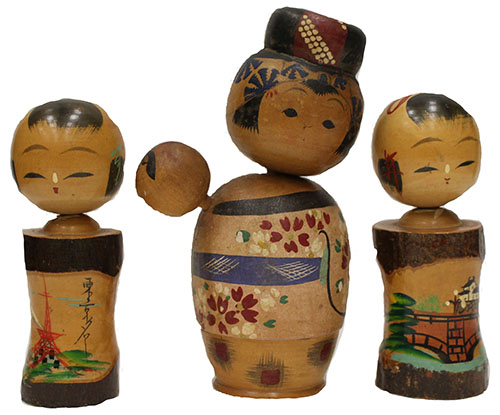 Kokeshi are carved wooden dolls known for their slender bodies, round heads, and lack of limbs.  They first became popular in northern Japan during the Edo Period (1603-1868), when they were sold as souvenirs to visitors of hot springs in the area.  Traditional kokeshi dolls have a very simple shape, are painted in only black, red, and yellow, and are covered with a layer of wax.  Since World War II, more modern and colorful forms have emerged, such as those shown here, which date to the mid-20th century.  They are now found throughout Japan and are frequently sold to tourists.  The dolls are usually made of wood from cherry or dogwood trees, which is seasoned for at least a year before carving.

These dolls, known as “nodding” kokeshi because of their mobile heads, are currently featured in Japan through the Photographer’s Lens, which will be on exhibit through October 6.  The Museum will also be focusing on Japanese culture during its Exploring Japan Open House on Saturday, April 7.  We hope to see you then!