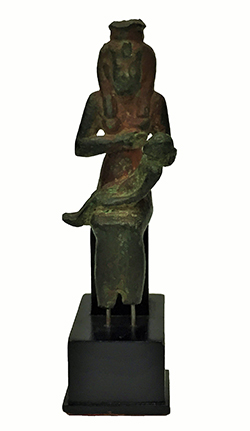 This bronze Egyptian figurine represents Isis, goddess of life and fertility, nursing her son Horus, the divine ancestor of the pharaohs.  It dates to the Late Dynastic Period, roughly 700 to 300 BCE.  Ancient Egyptians used votive offerings like this one to pay tribute during pilgrimages.  The sculpture’s basic imagery was widely copied by late Ptolemaic and Roman rulers.  This figure is one of three representing Isis featured in Mother Goddess: Fertility Figures of the Ancient Mediterranean, on exhibit through May 12.

Ali Eakes (’18), a student in Religion 313: Near Eastern Archaeology, Spring 2018, conducted the research for this post.