Lindsay’s research focused on artifacts left behind by a mysterious civilization that constructed massive cities and stepped pyramids in West Mexico hundreds of years before the Maya or Aztec.  Little is known about this ancient culture, except that the people buried their dead in shaft tombs—subsurface burial chambers cut into the ground and accessed by vertical shafts.  These burial chambers often contain grave offerings of jewelry, weapons, textiles, and figures of people and animals.  More numerous, however, are ceramic vessels.  All manner of bowls, jars, and other containers were filled with food and drinks for the dead.

The vessels were created during the Pre-Classic period (2000 BCE- 250 CE) and have long been sought by modern collectors.  Because of this interest, the shaft tombs have been extensively looted by grave robbers hoping to find valuable artifacts to sell on the international market, though it is illegal to export antiquities out of Mexico.  When looters can’t find tombs to rob, they create high quality forgeries.  Many of these forgeries are so convincing that they have made their way into museums throughout the world. 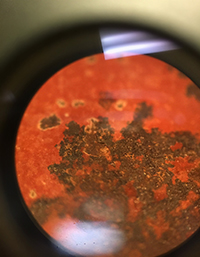 Details of organic stains on a jar under the light microscope at 3x magnification.

In order to study the MOA’s collection of West Mexican Shaft Tomb ceramics, Lindsay replicated a system of authenticating such pieces developed by forensic anthropologist Dr. Robert Pickering and retired chemist Dr. Ephraim Cuevas.  By examining ceramics taken by archaeologists from undisturbed contexts, they were able to discern two features resulting from natural processes within the shaft tomb burials that are easily observable using a magnifying class and a light microscope.  One feature is the remains of necrophilous insects that entered the tomb at the time of burial.  The second is manganese or iron stains from bacteria that use metals as a food source.  These processes manifest themselves in dark, lustrous, and blotchy stains on the surface of the ceramics.  If a ceramic has these telltale stains on its surface, it can be verified as being from a tomb context rather than a forgery.  Because the objects in the MOA’s collection have been extensively cleaned and conserved, it was difficult to discern between the stains from bacteria and the remains of the insects. However, of the sample of 75 vessels Lindsay examined, 53 of them demonstrated clear staining and are likely legitimate. 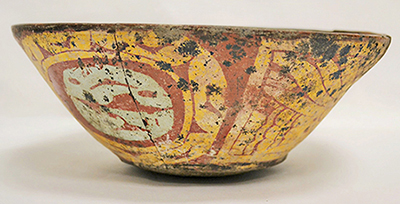 Example of staining on the exterior of a bowl in the MOA collection.

After completing this extensive research for her honors thesis, Lindsay curated the exhibit featuring a small selection of the authenticated ceramics as her final course project for ANT 305: Museum Anthropology.  Lindsay has also been a student employee of the Museum for all four of her years at Wake Forest.  She reflected on her journey: “I am so thankful for the many opportunities and experiences that I have been given.  I experienced first-hand how the museum and its collection are an amazing teaching resource, not only for the students that work there or the Anthropology department, but also the entire University.  How many undergraduate students in the United States can say they had the opportunity to help design exhibits, conserve objects, interact with museum visitors, and do independent research?  I feel that my honors thesis, working with the museum’s collection, and the resulting exhibit is a wonderful culmination of my time working at MOA.”