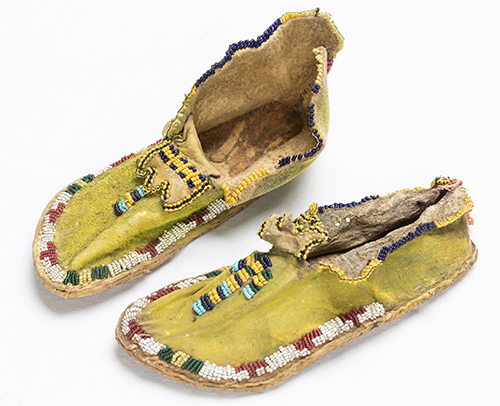 Moccasins are the typical footwear for Plains Indians, such as the Lakota Sioux, as well as other Native groups across the United States.  Hard moccasins, like this child’s pair, originated in the Southwest.  They have stiff rawhide soles that are sewn to soft buckskin uppers.  Leather thongs are added for lacing.

Each tribe has distinct shaping or other features to aid in identification.  These feature a common Sioux design of stepped triangles on a white background in the beaded border.  The greenish-yellow staining on the leather is also indicative of Lakota work in the 1880s.

Elaborate beading was common on moccasins used for festivals and ceremonies, while everyday shoes were usually much plainer.  Before European contact, Plains artists used dyed quills and native beads to embellish clothing and containers.  However, once white traders reached the area, their factory-made beads quickly gained prominence.  Early trade beads were comparatively large, but by 1830-1850 smaller beads, like the donut-shaped ones used on these pieces, known as seed beads, became common.  These glass beads come in more than 80 colors and a variety of sizes.  Detailed work in the smallest beads is the most prized.