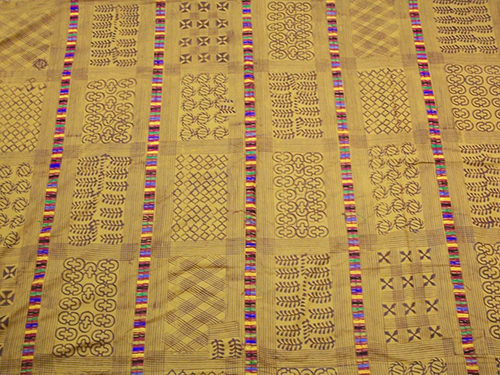 The Akan people of Ghana often decorate their textiles, like this cloth, with Adinkra symbols.  These symbols have been used for centuries to express different aesthetic themes such as strength, longevity, and remembrance.  There are hundreds of documented symbols.  They are applied to the dyed cloth with carved stamps.  The same symbols can also appear in other mediums such as on jewelry or brass weights.

Adinkra cloths are meant to be worn as clothing.  Traditionally, they were only used by royalty.  However, their use has grown to include the general population.  Adinkra cloths are often worn on special occasions, particularly at funerals.

This cloth is currently on exhibit in Afro Pop!, where it is displayed because of its connection to clothing worn by the character T’Chaka in the Black Panther movie.