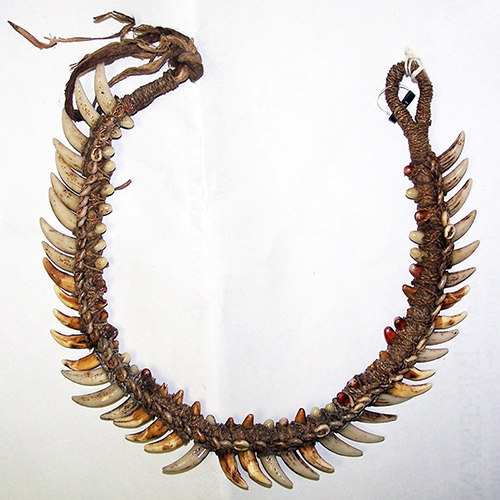 In pre-colonial Papua New Guinea, animal teeth, like the dog teeth in this necklace, were used as an exchange medium.  They were also used for aesthetic adornment, similar to gold or gems in other cultural contexts.  Papuan jewelry often included a variety of animal and plant parts, such as crocodile teeth, pig tusks, seeds, and bones.  Dog teeth were especially valuable, as they could not be easily gathered or duplicated.  The teeth had to come from adult dogs.  They were “earned” by successfully rearing (or capturing) animals.  The teeth had to conform to certain size and quality standards in order to be used for jewelry and trading.  During the pre-colonial period, dog teeth were rare commodities and signaled the high socioeconomic status of the owner and their family.

When the German colonists in the late 1800s realized that the Papuan people valued dog teeth, they saw an opportunity for economic growth, rather than a sanctified cultural practice.  They returned home to Germany, began mass producing dog tooth replicas made out of porcelain, and exported them to Papua New Guinea.  Essentially, the Germans were able to cheat the system by substituting a token that looked like a dog tooth, but did not truly represent the social value of the real thing.  The introduction of porcelain teeth flooded the market and undermined the significance of collecting animal teeth.  It is extremely difficult to discern between real dog teeth and porcelain replicas—though the actual teeth eventually show evidence of decay.  This necklace contains 42 dog teeth, but 27 of them are actually made out of porcelain.

This necklace is currently on display in Objects of Power: The Material Culture of Contested Memory.

Research for this post was completed by Anna Hathcock ’19.