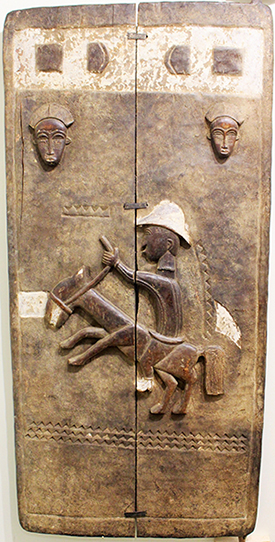 This wooden door from the Ivory Coast was made by the Baule people in the mid-20th century.  Known as anuan, such doors are carved with a variety of motifs as decorative embellishments for both public and private spaces.  Traditional Baule carving embraces adding ornamental touches to functional objects.  Carvers use the blank surface of the doors to create scenes from Baule mythology as well as purely decorative representations.  The horse-and-rider motif seen here is a common symbol representing military skill. This door’s rider wears a distinct white helmet, which may identify him as an African “tirailleur” soldier that fought in the French army.

This door is currently on display in Horses and the Human Experience.