This summer, the Museum of Anthropology will present a new WFU student-curated mini exhibit entitled A House Divided: Tri-Racial Tensions at Historic Bethabara.  Founded by Moravian immigrants in 1753, Historic Bethabara is remembered as the first European village in what would later become Forsyth County, North Carolina.  Designated as a National Historic Landmark in 1999, the site is managed by the City of Winston-Salem as an archaeological park.  While Bethabara was established by European immigrants, they were not the only people in the village.  MOA’s exhibit will address the opinions of Cherokee travelers who passed through the area and of enslaved African-Americans who toiled in the fields, workshops, and tavern.  Archaeological artifacts recovered from Bethabara will be used to explore the relationships between these three groups, and how Moravian colonization in the 18th century would later impact Cherokee removal and African-American emancipation in the 19th century. 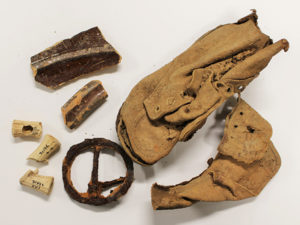 A selection of the archaeological artifacts included in the exhibit

Artifacts featured in the exhibit include salt-glazed stoneware sherds, stoneware pipe fragments, leather shoe fragments, iron implements, animal bones, and shells.  The objects were recovered during excavations at the Potter’s House in the early 1970s.  Additional archaeological research at Bethabara is ongoing with Dr. Paul Thacker of WFU’s Anthropology Department working with students to do a remote sensing study of a location along Monarcas Creek earlier this year.

The student curators of A House Divided were enrolled in Religion 392/692 First People’s Traditions: Cherokee Removal during the Spring 2019 semester, which was co-taught by Dr. Ulrike Wiethaus and MOA Academic Director Dr. Andrew Gurstelle.  This was the third in a series of courses related to Cherokee history and contemporary commemoration of the Trail of Tears taught by the pair.  Students in an earlier course curated MOA’s exhibit Objects of Power: The Material Culture of Contested Memory, which opened last fall and will be on display through August 24.

As with the previous classes, the Spring 2019 students analyzed the MOA as a form of commemoration and cultural valorization, and then applied their analysis to other historical sites including the Moravian Cherokee mission at Springplace, Georgia.  Locally, the six students visited Historic Bethabara in order to better understand the context of the loaned archaeological artifacts they would research for the exhibit.  In addition to the objects themselves, the students used the Fries translation of the Bethabara journals as a primary source.  They then created the exhibit based on their original research.  A House Divided: Tri-Racial Tensions at Historic Bethabara will be on exhibit June 18 through October 14.