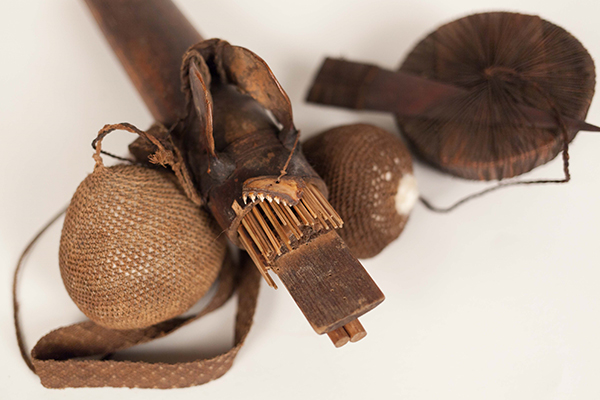 Used in the Amazon rainforest by members of the Matis tribe, these blowgun darts are typically tipped with curare, a poison made from scraping and boiling bark from a poisonous vine found in the area.  The poison can kill a bird in less than two minutes and a large mammal in less than twenty minutes.  The darts themselves are made from thin palm stems and are carried in a bamboo quiver.  The monkey mandible attached to the quiver is used to carry clay which is applied to the dart to act as ballast before it is blown out of the gun.  The bowl-like attachment is used to carry the curare, while the woven bags on each side carry kapok (similar to cotton) that is put into the blowgun behind the dart.  Piranha teeth attached to the quiver are used to score around the end of the dart to ensure that the poison head will break off in the prey.

The blowpipes used with these darts are often more than 10 feet long and made with strips of palm bound together and covered in resin.  Blowgun hunting typically targets animals in the canopy, such as monkeys.  Matis hunters are incredibly accurate with these weapons, even at great distances.  Because they do not make any noise, it is possible for them to take down entire groups of monkeys at once.

The Matis live in the Vale do Javari Indigenous Park in western Brazil, near the Peruvian border.  There are fewer than 300 tribe members remaining.