Day of the Dead Plate 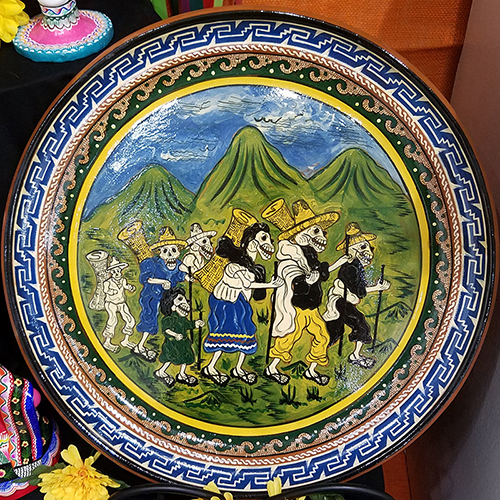 This ceramic plate was made by artisan Fidel Avalos Espinosa in the Mexican state of Michoacán.  Avalos works in the town of Capula, a noted center for ceramic arts. He is particularly known for his Day of the Dead scenes on plates and tiles with skeleton figures known as calaveras.  Avalos is clearly influenced by the black and white drawings of illustrator José Guadalupe Posada, who created calaveras as social commentary. Avalos’s figures are drawn in the same style as Posada, but he creates vibrant, colorful scenes surrounded by intricate borders.  Avalos paints the small details with handmade squirrel tail brushes, some as fine as only three hairs.

The scene depicted on this plate shows skeletons hiking, possibly representing the long and arduous journey souls of the deceased are thought to take in returning to this world for the Day of the Dead.  The plate is meant as a decorative object rather than for functional use, serving as an example of the growing market for Day of the Dead folk art.

The plate is on exhibit in Life after Death: The Day of the Dead in Mexico through December 6, 2019.