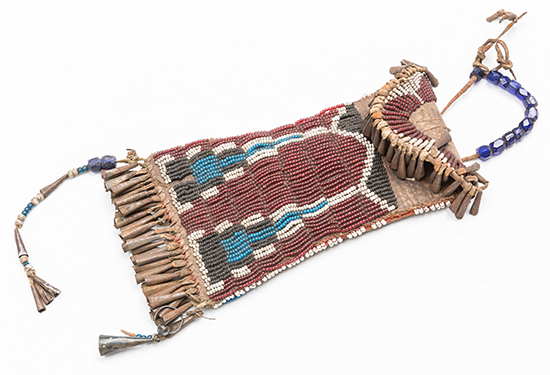 Among the last of the Plains tribes to surrender to the U.S. Cavalry, the Kiowa have shared an Oklahoma reservation with the Comanche since 1868.  A member of the Kiowa tribe made this strike-a-light case in the mid-1880s.  The small pouch was used to carry fire-starting tools including pieces of flint and steel and some small fibers that would light quickly.  Cases like this one were also popular as personal adornment for men and women.  Men often attached them to their quivers, while women and girls wore them as belt ornaments.

This case’s design was created with different colors of small trade beads commonly known as seed beads.  The maker used short strings of a few beads each sewn next to each other in a style known as lazy stitch.  This stitch is commonly used for geometric patterns like this one.  It also allows larger surfaces to be covered with comparatively less effort.

In addition to the beadwork, Kiowa strike-a-light cases commonly have tin cones or bells attached to the fringe on the flap and bottom of the pouch, as shown here.  The tin often came from salvaged food or ammunition cans.