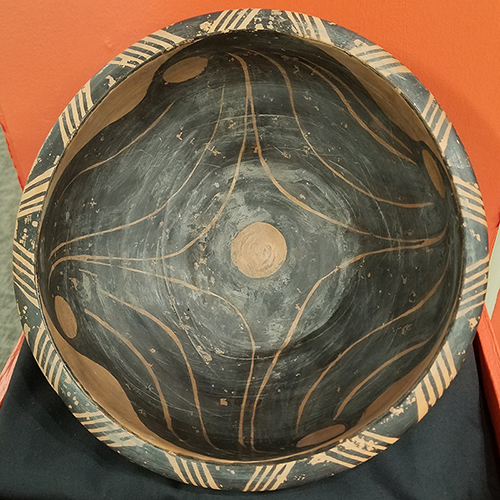 The archaeological remains of the Neolithic Majiayao culture were discovered in northwestern China in the early 20th century.  While more than 2000 sites have been identified, less than 3% of them have been excavated.  Painted pieces of pottery are the most famous artifacts recovered from these sites.  Majiayao pottery, like this basin dating to 3200-2700 BCE, is typically painted with black pigment in sweeping curvilinear designs.  Skilled Majiayao craftspeople created the pottery in large quantities.  As agriculture flourished, social complexity increased during this time period, allowing for the development of such specialized labor.  Basins like this one were used to store grain and were also in high demand as funerary objects.

This basin is currently on exhibit in Un-Writing World History.