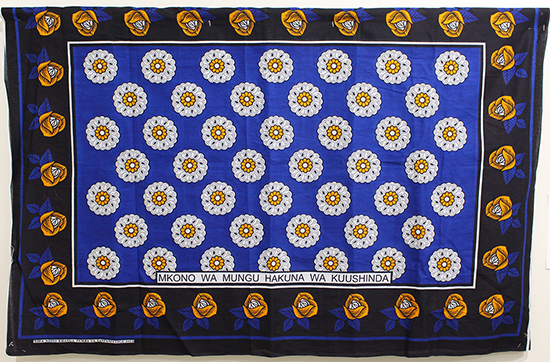 Khanga (also spelled kanga) cloths are brightly printed rectangular cotton textiles that are very popular in East Africa.  Khangas measure approximately 45” by 65” and are distinguished by their vibrant central design (mji) surrounded by a colorful border (pindo).  Khangas are an important medium of communication, as they also feature Swahili proverbs, known as jina.  The saying may convey a religious or political message or simply a piece of wisdom.  This khanga from Tanzania features the phrase “Mkono Wa Mungu Hakuna Wa Kuushinda,” which translates to “The hand of God is not to be overcome.”

Khangas have their origins in the mid-19th century on the island of Zanzibar.  They are named after the Kiswahili word for a spotted black and white guinea fowl, because the earliest cloths had a pattern resembling the bird’s coloring.  Designs have since evolved to feature a great variety of pattern and color.  The Swahili proverbs were added in the early 1900s.  Although the cloths were originally designed and printed in India, China, Japan and Europe, since the mid-20th century many more are printed in East Africa.

Khangas are usually bought in pairs.  They can be used for a wide variety of purposes, functioning as skirts, shawls, head wrappings, blankets, baby carriers, gift wrap, and more.  In general, women use khangas more often than men.  The cloths are popular as gifts, especially for important life events such as for a bride at her wedding or a mother at birth of her baby.  Khangas may be passed down as inheritance from mother to daughter.

This khanga is currently on display in Cultures, Contexts, and Collectors.  Additional research was completed by Emily Wilmink (’20).