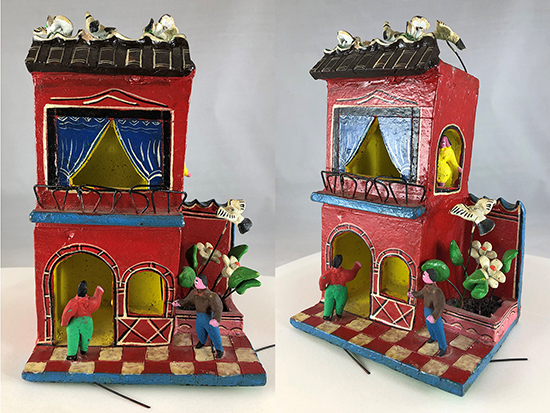 This brightly colored ceramic piece is from Santa Cruz de las Huertas, just outside of Guadalajara, in the Mexican state of Jalisco. Jalisco is known as one of the largest pottery-producing states in the country. This whimsical style of work in clay, featuring vibrant colors and figures mounted on wire to create movement, was first created by Candelario Medrano Lopez (1981-1986).  As his works gained in popularity, a number of other artists in the area followed his example.  They are collectively referred to as the School of Medrano.  This house from the mid-1990s was created by an artist from the School.

As did many of the people in the village, Medrano began his career producing ceramic sewer pipes before transitioning to more artistic works.  He used clay from a local quarry, which he crushed, added water, and then mixed with a harder clay referred to as liga. The resulting mix was black prior to firing.  He used a simple kiln consisting of a brick lined hole covered with old tiles and a fire built with wood and rubber tires.  Medrano created colorful Noah’s arks, churches, houses, castles, boats, trains, cars, and airplanes, among other things, all populated with large groups of people and animals.  The charming figures from Medrano himself and the larger School are very popular in the international folk art market.