These three masks from the MOA’s permanent collection are from the Oruro area of Bolivia.  Each mask is made with linen soaked in plaster and decorated with paint, hair, and mirrors.  The masks are each a combination of good and evil.  Characters that appear at the Oruro Carnival include Moors or African slaves, clowns, llama herders, and animals like bulls and bears.

Before we make a mask, let’s learn about Carnival, its history, and how it is celebrated in Bolivia.

The term Carnival is used in areas throughout the world with a large Catholic presence, but is can be called different things in other countries. Carnival events occur during late February or early March, because it is a Catholic festival season that occurs before the liturgical season of Lent. Lent is the 6 weeks before Easter.

Carnival is a reversal ritual, in which social roles are reversed and norms about desired behavior are suspended. The consummation of large quantities of alcohol, meat, and other foods is a common part of Carnival. It involves a public celebration and/or parade. Carnival combines elements of a circus and a public street party with costumes and masks.

Wearing masks and costumes during carnival allows people to forget their everyday lives and societal rules. Masks and costumes usually have exaggerated features like noses, bellies, mouths, and/or elements of animal bodies.

During Medieval times, by the end of winter, food stores would be low and could not be replaced until the spring when produce and meat would again be available.  Once spring was near and it was assured that everyone had enough left to eat, all the food that had survived the winter would be eaten in a big celebration. As part of this communal feast people would eat and drink to excess, dance, sing, wear costumes, and masks. This type of folk tradition is thought to be the origin of Carnival.

For hundreds of years the Catholic Church tried to ban these traditions, but they were never successful. Eventually, the church found it easier to absorb Carnival into its religious traditions than to eliminate it. This led to a degree of Christianization of Carnival and the festivities became part of the liturgy and the liturgical year. 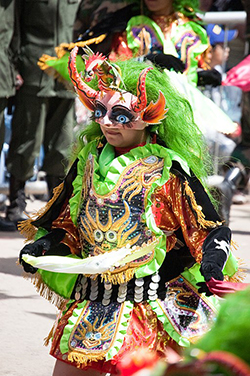 In Oruro, Bolivia, the Carnival of Oruro is a religious festival dating back more than 200 years. Originally it was an  indigenous festival but the celebration was later transformed to incorporate Catholic rituals around the Virgin of Candelaria.

The native ceremonies were banned by the Spanish in the 17th century. However, the indigenous people continued to observe the festival in the form of a Catholic ritual. Christian icons and saints stood in for and were used to conceal Andean gods. The celebration began forty days before Easter. Modern carnival events continue the ongoing blend of indigenous and Catholic religious practices in the region.

Because the festival has been going on so long, UNESCO proclaimed the Carnival of Oruro as one of the Masterpieces of the Oral and Intangible Heritage of Humanity on May 18, 2001.

This video has step by step instructions on how to make a mask:

In the video they are creating a lion, but you can make the face look however you want. Once you have the basic form, you can create anything.

If you want to learn more about Carnival in Bolivia, take a look at these videos:
Exhibition of carnival masks in La Pez, Bolivia
Video of Carnival in Oruro, Bolivia 2019