China: Make Your Own Paper

The Origin of Paper

Archaeological research shows that the earliest known paper dates back to 200 BCE in China. The making of paper was driven by the development of writing systems.

The Origin of Writing

Writing is defined as a system of graphic marks representing the units of a specific language. The earliest writing systems were invented around the same time but independently in the Near East, China, and Mesoamerica. Cuneiform script, created in Mesopotamia around 3200 BCE, was first. However, Chinese script is the oldest continuously used writing system in the world. 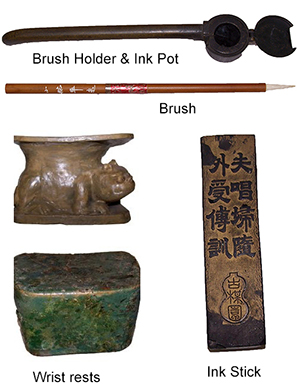 These tools are all from the MOA collections

Chinese script developed approximately 3400 years ago and has never needed to be decoded because the characters have changed little since then. Chinese writing does not use letters or an alphabet but characters called kanji. There are many thousands of Chinese characters but only about three or four thousand are used regularly. Traditionally, writing was done by a scholar using a brush, ink stick and stone, ink pot, and wrist rest.

The earliest Chinese inscriptions were engraved on animal bones, turtle shells, bamboo, and silk. Over time, the use of these materials progressed to paper as we know it.

Origin and Spread of Papermaking

Historical records trace papermaking to around 105 CE, when Ts’ai Lun, an official of the Chinese Imperial Court, created a sheet of paper using mulberry bark and other fibers. After his innovation, the first Chinese papers were made from a combination of recycled fishing nets, bamboo, mulberry bark, silk, and hemp.

Examples of paper made from mulberry bark

Following its invention, papermaking spread from China to other parts of the world. By the early 600s CE, papermaking had reached Korea and Japan. Central Asia was making paper by 751 CE; Spain by 1151 CE; and Italy by 1290 CE. Papermaking reached the United States in 1690 CE.

Traditionally, all the stages of papermaking were done by hand. Even though modern inventions have transformed this ancient craft into a highly technical industry, the basic steps in papermaking remain the same to this day.

To learn more about paper, check out the Robert C. Williams Museum of Papermaking at Georgia Tech.

You can watch the art of Chinese papermaking here. 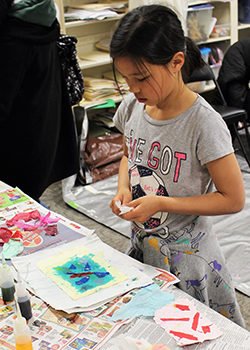 There are a number of other videos online showing how to make paper from recycled paper, jeans and even corn. You can also find videos on how to create marbled and decorated papers like these: