What is Shadow Puppet Theater?

Shadow puppet theater, also called shadow play, is an ancient form of storytelling and entertainment that uses flat, cut-out figures called shadow puppets. Puppets are held between a source of light and a translucent screen. Various effects can be achieved by moving both the puppets and the light source. A talented puppeteer can make the figures appear to walk, dance, fight, nod, and laugh.

Shadow puppet theater has a long history in Southeast Asia; especially in Indonesia, Malaysia, Thailand, and Cambodia. It is also known as an ancient art and a living folk tradition in China, India, and Nepal. Shadow play can also be found in Egypt, Turkey, Greece, Germany, France, and United States. Currently there are more than 20 countries that have shadow show troupes.

Throughout Indonesia, shadow play, which has been around for at least 1000 years, is called wayang. Wayang refers to the entire musical and storytelling show. The stories depict cultural legends about kings’ battles and quests, mythologies, scenes of romantic love, and episodes from Hindu epics. 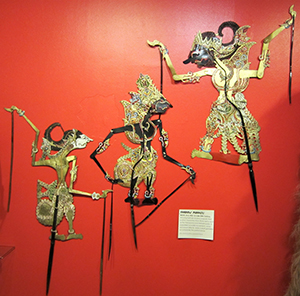 In Indonesia, there are several types of puppets, but a flat puppet with moveable parts is called wayang kulit. The puppets are made from buffalo hide with handles and control rods carved from buffalo horn. The puppets are painted with beautiful colors, including gold, and represent people, gods, animals, and landscapes.

A puppet master is called a dalang. He sits behind the screen, singing and narrating the dialogues of different characters. By varying his voice, the dalang can create suspense and drama in the story.

A wayang performance is accompanied by a gamelan orchestra. The orchestra is made up of mostly percussive instruments.  A gamelan orchestra also uses vocalists called sindhen. The gamelan provides the background melody and rhythm for the story.

The WFU gamelan performs outside.

Traditionally, a wayang performance starts at midnight and last until dawn.

Wayang kulit performance was designated as a Masterpiece of the Oral and Intangible Heritage of Humanity by UNESCO in 2003. In return for this designation, UNESCO required Indonesians to preserve this traditional art form.

Master puppeteer Dr. Gusti Sudarta from the Indonesian Institute of the Arts, and members of the Gamelan Raga Kusuma recorded this special performance of the Wayang Kulit “The Legend of Sutasoma” earlier this year.  Although Dr. Sudarta was unable to visit Wake Forest as planned due to the pandemic, his performance was sponsored by Department of Music, IPLACe, the Museum of Anthropology, and the Global Affairs Fund for International Scholars.

You can see a shorter shadow puppet theater performance here. 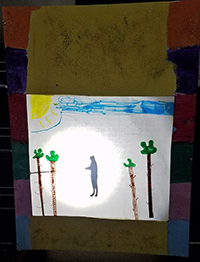