First, let’s learn about Children’s Day and how it is celebrated in Japan.

What is Children’s Day?

Traditionally, May 5 was called tango-no-sekku, a festival to celebrate the health and safety of all Japanese people. On this day, people would use iris leaves to decorate their homes and themselves because it was believed the leaves would protect them from evil.

Eventually, this day became known as Boy’s Day, because the Japanese word for irises, shobu, and the word that means “importance of martial arts” sound the same. Also, iris leaves look like swords, which were associated with boys.

In 1948, May 5 became a national holiday called Children’s Day, Kodomo-no-hi. It is a day to respect children’s personalities, to celebrate their happiness and health, and also to appreciate their mothers.

How Children’s Day is Celebrated

On Children’s Day, Kodomo-no-hi, parents give their children presents, many special Japanese treats are eaten, children participate in parades, and koi windsocks called koi-nobori are hung. 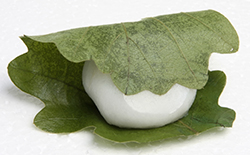 One of the most popular treats for Children’s Day is called kashiwa-mochi. Kashiwa-mochi is white as snow and delicious. It is a sweet bean paste inside of an oak leaf. It is said that oak trees, Kashiwa, don’t lose their leaves until new ones sprout, so kashiwa-mochi represent having lots of children, longevity, and happiness. Because of its lucky meaning, many people in Japan eat kashiwa-mochi on Children’s Day.

Another treat is called kushi-dango, which are three small round balls of mochi on a skewer. The colors used are green, because it looks like spring grass, white, resembling new snow, and pink because it is the color of cherry blossoms. Each color represents something good: green represents growth, white represents purity, and pink represents the cleansing of  bad fortune. 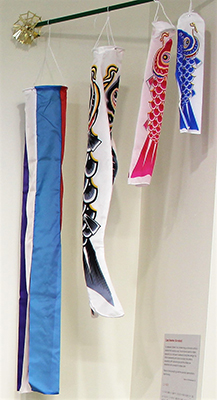 Here are two simple ways to make a koi windsock:

Instructions can be found here.

Now that you have your windsock, here is a traditional song to sing:

In English, the lyrics are:
Koinobori is higher than the roof
The big carp is for the father
The small scarlet carp is for children
They swim joyfully