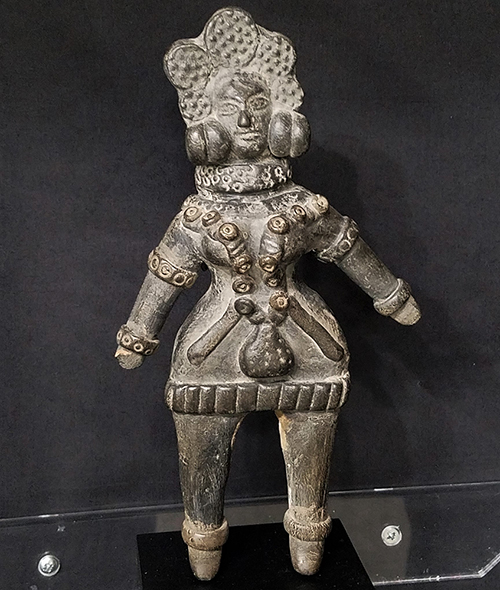 This small goddess figure was produced in Mathura in north-central India during the period of the Maurya Empire (322 – 185 BCE).  At that time, the city was an important economic, religious, and cultural hub.  Archaeologically, it is one of the principal sites yielding large numbers of Mauryan period goddess figures.

The figure is made of terracotta, the most widely used sculptural medium of the period. The majority of the figure was produced from a mold, with some handmade decorative features added on.  The figure’s broad hips, prominent breasts, and flowered headdress represent fertility.  While there was an established pantheon of deities during the Mauryan period, many goddesses had maternal functions.  As a result, scholars have not been able to identify figures like this one as corresponding to a specific goddess.  Because they were easy to produce and relatively inexpensive, figures like this one were likely used for personal devotion, perhaps by being placed on shrine as votive offerings related to childbirth.