Who are the Huichol? 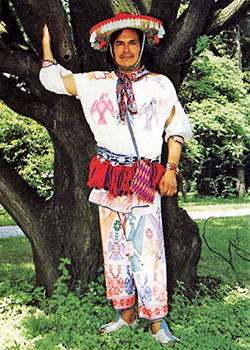 Descendants of the Aztec, the Huichol (pronounced Wee-chol) or Wixáritari are an indigenous people of Mexico. They are best known to the larger world as the Huichol; however, they refer to themselves as Wixáritari in their native Huichol language.

Like other indigenous people, the Huichol survived the Spanish Conquest of Mexico and their population today is about 18,000. Most continue to live in the states of Nayarit, Jalisco, Zacatecas, and Durango. However, some have migrated to cities like Tepic and Guadalajara because of poverty, land invasions, and illnesses.

Few outsiders are welcome in Huichol villages because they are trying to keep their traditional ceremonies, language, arts, and culture alive. This is difficult because of the increasing physical and cultural influences of the modern world.

The Huichol are known for their colorful bead and yarn works. Historically, shamans created these objects to reflect their spiritual relationships with ancestors and nature deities. They are also made as offerings to their gods.

Today, creating bead and yarn works has become a family enterprise with individual Huichol artisans developing his or her own personal style. They are dependent on the sale of artworks as a means of survival but Huichol art is still very symbolic. 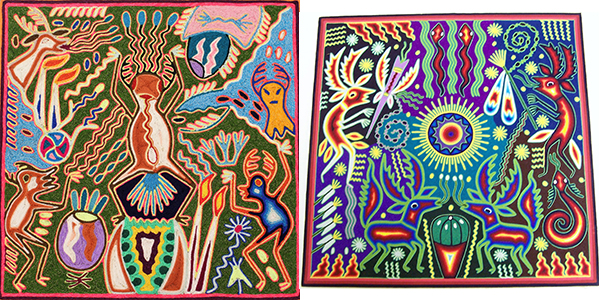 These two Huichol yarn paintings are part of the MOA’s permanent collection.

To make yarn paintings an artist spreads beeswax on a board and then sketches out a design. The design is filled in by carefully pressing brightly colored yarns into the wax.

The first yarn paintings made for tourists were largely decorative. Within a short time, artists realized yarn paintings could tell their stories, myths, and record the sacred visions of the Huichol.

Learn more about the Huichol and their arts with this video: Visions of the Ancestors: Mexican Huichol Art.

Glued yarn painting from a video created by Jennifer Castano
You will need:
• Glue
• Drawing paper
• Cardstock or poster board
• Pencil
• Yarn
• Scissors
• Toothpick or skewer

Sticky yarn painting from a Blick Art Materials video
You will need:
• Pencil
• Paper
• Felt with a sticky back
• Yarn or embroidery floss
• Scissors