Who are the Cherokee?

The Cherokee, who call themselves Aniyvwiyaʔi, the Principal People, are one of the indigenous peoples of the southeastern United States. Before the 18th century, the lands of the Cherokee were concentrated in what are now the states of North Carolina, Tennessee, South Carolina, Georgia and Alabama.

Today, many Cherokee people are concerned with living in the modern world while preserving the language, traditions, customs, and arts that make them unique. 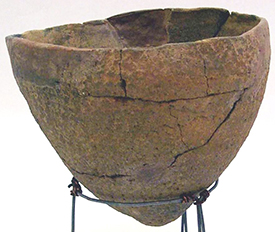 Archaeological remains of a traditional pot

The Eastern Band of Cherokee Indians have the longest continuing pottery tradition of any tribe in the country, going back three thousand years.

Traditional Cherokee pottery is hand built, thin-walled, waterproof, and stamped with wooden paddles that create rectilinear and curvilinear designs. It is not glazed, but sometimes burnished or covered with slip. Pots are fired in an open fire that imparts mottled smoke patterns. Shapes include large and small cooking pots, serving bowls, water bottles, and effigy pots.

Over time, Cherokee pottery underwent many changes, and during the 20th century many Cherokee potters were making pots in styles that were preferred by tourists. These pots were shiny and black on the outside and mostly decorative. 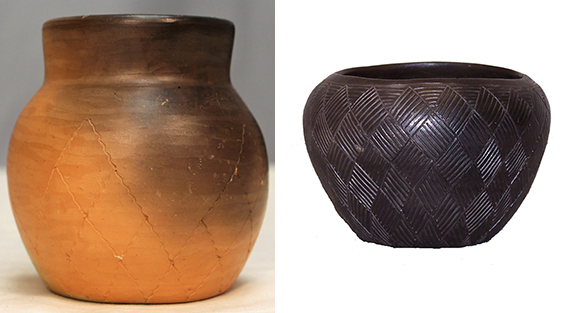 Around 2003, many Cherokee potters became interested in reviving much older Cherokee styles, and the Cherokee Potters Guild was formed. Its mission is to research, teach, and preserve the traditional Cherokee pottery methods.

Joel Queen is a ninth-generation potter from the Eastern Band of Cherokee Indians.  You can watch an interview with him here and see him making pots here.

The legend goes like this: a kindhearted girl was carrying a bark bucket to fill with water at the spring when she noticed a mud dauber struggling to get out, its wings wet and stuck in the mud. The little girl was scared of being stung but used a stick to help the little dauber get out safely.

As she continued on with her water, she tripped and out flew the bucket, which took her so long to make, and it smashed into many pieces on the ground. She heard the buzzing of the mud dauber she helped nearby, who then stopped to help her. He said, “Don’t feel so badly. I will teach you something useful. I will teach you to make pottery so you can teach your people.” He then went on to take pieces of clay from the bank until he had enough to make a small pot. He molded and shaped the clay and taught the girl how to make, stamp, and fire pottery so it could hold water. The girl rushed home to teach her people, and according to the legend, the Cherokee have been making pottery ever since.

Make your dough following these instructions:

You can search YouTube for other crafts to make with salt dough.