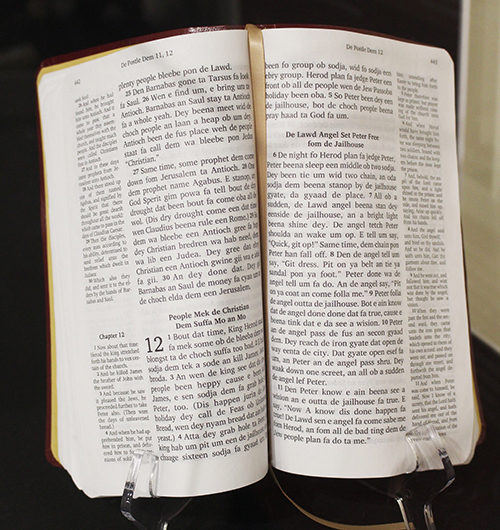 The Gullah are members of African American communities that developed a unique culture and language in the Atlantic coastal region stretching between Jacksonville, NC and Jacksonville, FL.  The history of the Gullah peoples is rooted in the horrors of the trans-Atlantic slave trade.  Slave traders took Africans from across the continent, meaning that those who survived the Middle Passage and arrived in the American South did not necessarily share a culture or language with those around them. Further, African languages, customs, and traditions were actively suppressed by plantation owners.  Gullah arose in this context: a need for African peoples and their descendants to flourish together, while also surviving under the oppression of slavery.

This blended identity is expressed in the Gullah language, also known as Sea Island Creole. Creole languages are initially derived from two or more other languages but have a full vocabulary and grammatical rules. Gullah is derived from English, Spanish, and at least a dozen African languages. The mainland neighbors of Gullah speaking communities were slow to recognize Gullah as a separate language from English.  In the 1930s, linguist Lorenzo Dow Turner recognized that the Gullah language was full of African loan words, particularly from languages spoken along the Atlantic coast such as Mende and Temne.  Later studies of Gullah identified its grammatical rules and demonstrated connections to multiple African languages spoken between Senegal and Angola, as well as Spanish.

The first full version of the New Testament in the Gullah language was published in 2005.  This edition features an English translation in the margins. It is currently on display in the Linguistic Anthropology section of Stories of Humanity: Anthropology in North Carolina.