Sarawak is the largest of the thirteen states of Malaysia. It stretches along Borneo Island’s northwest coast and includes many beaches on the South China Sea. It is also known for the rugged, dense rainforests of its interior, which are mostly protected parklands. Sarawak has an abundance of animal and plant species. Because Sarawak is close to the equator it has a tropical climate.

The largest city in Sarawak is the capital, Kuching, which is set on the Sarawak River. Kuching is the economic center and political seat of Sarawak’s government. In 2019, the population of Sarawak was 2,810,000. There are six major ethnic groups, and about forty sub-ethnic groups throughout Sarawak. Malay and English are the official languages but about forty-five other languages and dialects are spoken in Sarawak.

Sarawak has been inhabited for 40,000 years. The Bruneian Empire controlled the coastal regions of Sarawak in the 16th century. In 1839, a British explorer arrived in Sarawak and he, and his descendants governed the state from 1841 to 1946. This is called the time of the White Rajahs. In 1946, Sarawak became a British Crown Colony and was not granted self-government until July 22, 1963. Sarawak became one of the founding members of independent Malaysia, which was established on September 16, 1963.

Flags are used as the symbol of a nation, state, or organization. The colors and designs on a flag can represent people, government, natural resources, ideas, and religion, among other things. Throughout Sarawak’s history they have used several different flags.

The first flag used after Sarawak came under British control had the St. George’s cross on a white background. In 1946, Sarawak began to use the style of flag found in our collection. The colonial flag uses the image of a crown to indicate its British connection. The five points of the crown signify the five divisions of Sarawak. However, the basic design goes back much further. The yellow field and colored crosses date to the time of the White Rajahs. 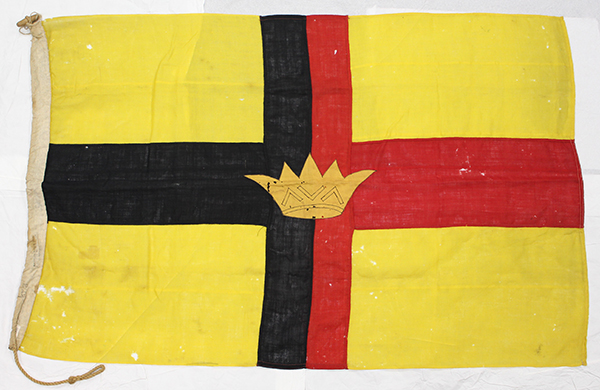 When Malaysia separated from the British Monarchy in 1963, the state of Sarawak did not initially create a new flag to celebrate its independence. Instead, it continued to use its colonial flag for ten years. Finally in 1973, the colonial flag was

replaced by a new flag. It consisted of a blue triangle imposed on two red and white stripes, representing the unity of the indigenous people of Sarawak.

The flag used in Sarawak today has a yellow background with a red and black stripe with a nine pointed star. The nine-pointed star represents the nine divisions in the state, while the yellow color denotes the importance of upholding the law, unity and stability in diversity. The red stripe stands for courage and the black stripe symbolizes the abundant natural resources that Sarawak possesses. You can see that this current flag has many similarities with the colonial version.

Like many flags, these examples from Sarawak show how an object can represent the entire history of a land and its peoples. Check out this website to learn more about flags of the world.

In the video she is making a large flag with four sheets of paper. You can choose to use just one sheet and make a smaller flag if you wish.