Who are the Aboriginal People?

Australia’s Aboriginal peoples are one of the two distinct groups of indigenous peoples in Australia. Most believe Australia has been populated for at least 45,000 to 50,000 years. However, some archaeologists working in the Northern Territory claim that early humans arrived in that area as early as 65,000 to 80,000 years ago. What is certain is that by about 35,000 years ago, the indigenous people occupied all of the Australian continent.

By 1788, when Europeans began to settle in Australia, estimates of the Aboriginal population varied from 300,000 to more than 1,000,000 among as many as 500 groups. At that time more than 250 different Aboriginal languages and hundreds of dialects were spoken with most indigenous people being bilingual or multilingual. 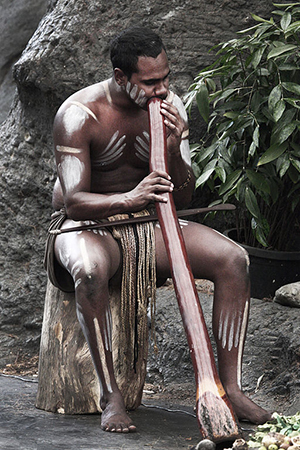 The Aboriginal people of Australia have a rich, living culture full of food, traditions, and music.

What is a Didgeridoo?

The didgeridoo is a wind instrument played by continuously vibrating the lips and creating sounds with the voice box to produce a droning or humming sound. These noises are created while using a special breathing technique called circular breathing. 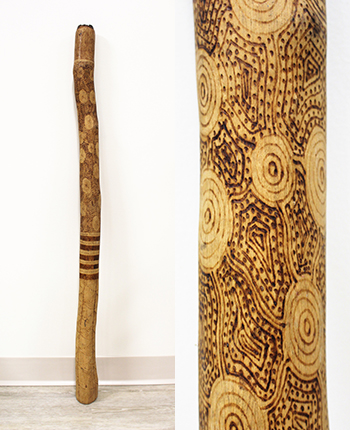 This long didgeridoo from the MOA education collection is decorated with traditional Aboriginal designs.

Didgeridoos were first played by the indigenous people of northern Australia about 40,000 years ago. So, the didgeridoo is one of the world’s oldest musical instruments. Traditionally, they were made from fallen eucalyptus branches or trees that had been hollowed out by termites. Once cut, the branch or tree was scraped of its bark and the inside was cleaned out with a stick or hot coals. The outside was decorated with symbols and designs that were important to the Aboriginal people. The length of a digeridoo decides its sound. The longer an instrument the deeper the pitch, and the shorter, the high the pitch. Digeridoos are used as an accompaniment to chants, songs, and ceremonial dancing. Traditionally, only men played the digeridoo.

Today, most digeridoos are still made in the traditional way. Now they are played by men, women and children. Some people refer to the digeridoo as the sound of Australia.

If you’d like to see how a traditional didgeridoo is made and played check out this video by the fabulous David Hudson.

Take a look at this website for instructions to make your didgeridoo.

*A paper towel tube will make a shorter instrument. You can tape two or more together to make it longer.

*Instead of coloring on the paper and attaching it to the tube, you can color or paint right on the tube.