These copper crosses are named after the Katanga region, a rich copper mining area in southeastern Democratic Republic of the Congo. They are also known as handa. The crosses have equal arms and are usually between seven and nine inches across, weighing about two pounds.  Their uneven surface comes from using sand molds to cast the cross-shaped ingots.

The peoples of the Congo highly valued non-ferrous metals including copper. In Katanga, in the 13th and 14th centuries, copper crosses of various sizes were associated with funerary rituals and were buried with the deceased alongside cowrie shells and glass beads, all symbols of wealth.  In the late 19th and early 20th centuries, Katanga crosses like these were used as currency in everyday trading across Central Africa. They were commonly used for dowry payments because they were unlikely to lose their value over time. The crosses also allowed wealth to be stored in a way that was easily transportable.  Additionally, they could be melted down and recast in smaller sizes for currency or used for other purposes like jewelry. 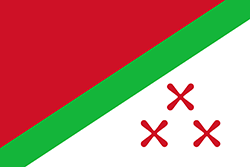 Shortly after the Republic of the Congo (as it was first known) declared independence from Belgium in 1960, the Katanga region seceded from the new country and declared its own independence. Katanga used the cross as a national symbol, appearing on its flag and coins.  Katanga was forcibly reunited with the rest of the country in 1963.