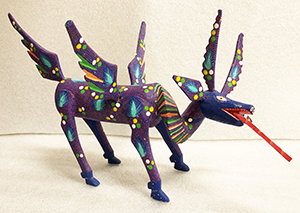 Alebrijes are brightly colored Mexican folk art sculptures depicting fantastical creatures or familiar animals. They can have horns, antlers, wings, fangs, fins, scales, human bodies, and some have all at once. No two are exactly alike, but all alebrijes are painted with intense, vibrant colors and intricate patterns. Artists use detailed patterns of stripes, dots, geometric shapes, flowers, and flames. Many creatures have bodies that are exaggerated, twisted, or contorted. The faces of alebrijes have expressions ranging from peaceful and playful to suspicious and sinister.

Most people believe these distinctive cultural artifacts represent a long Mexican folk art tradition, but in fact they only began to appear in the 1940s. Originating in Mexico City, the first alebrijes, along with the invention of the term, were created by renowned indigenous Mexican artist Pedro Linares (1906-1992).

Before he began creating alebrijes, Linares was known for making paper-mache piñatas, carnival masks, and religious figures that were sold in markets throughout Mexico City. Linares often told the story of how he was inspired to create fantastical alebrijes. Basically, he became very ill and while in an unconscious state Linares dreamed of these incredible, scary creatures. The creatures began chanting a single nonsense word: alebrije… alebrije… alebrije! He became afraid and couldn’t tell if they were warning or threatening him. However, it was enough to startle him awake in time for his fever to subside. If you’d like to hear more of Linares’ story and see pictures of him at work check out this short video. 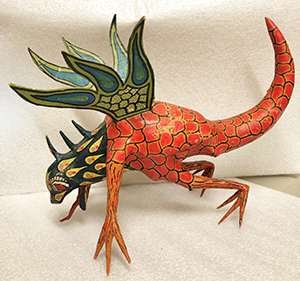 This paper-mache dragon alebrije is part of the MOA’s collection.

After recovering from his illness, Linares began using paper and cardboard to craft large, vivid, ethereal creatures that no one had ever seen before. He called these sculptures alebrijes. At first the alebrijes were so scary no one would buy them. After a time, Linares caught the attention of a prominent gallery owner who marketed and sold his colorful sculptures.

How Alebrijes are Made

Originally, Linares made all his alebrijes from paper-mache. Eventually, Linares left Mexico City and returned to his native village of Arrazola in Oaxaca. It was there Linares shared his designs with other artisans in the village. A man named Manuel Jimenez was the first to create the brightly colored creatures out of copal wood instead of paper-mache. Jimenez incorporated Linares’ visions into the pre-Hispanic woodcarving tradition that already existed among the indigenous Zapotec people of that area. This video shows artists carving wood alebrijes. 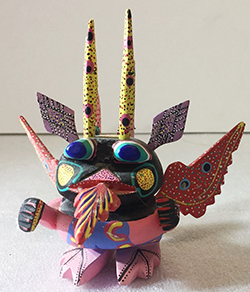 This playful wooden alebrije is part of the MOA’s collection.

Many artists, families, and villages in different regions of Mexico also create their own versions of alebrijes. This folk art craft has become an art form that is prized around the world and has built a unique arts-based economy. Alebrijes can be found in private and museum collections around the world. They have become so popular they are seen in movies, books, and as general décor. You might recognize them from Disney’s Coco. Although they are not specifically associated with Día de Muertos, sometimes alebrijes are used as decorations during the festival. 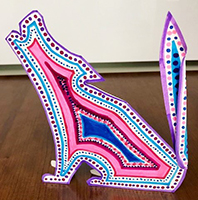 Here are some templates we’ve created, but you can also search for more or draw your own:
Armadillo   Coyote   Frog   Horse   Lizard   Wings & Feet

Check out these two videos about how to make paper alebrijes. In the videos she uses pastel oils crayons, you don’t have to use those. Markers, colored pencils or regular crayons work just fine.

If you want to make a more elaborate alebrije out of paper-mache or clay you can find how-to videos on YouTube.