Who are the Yup’ik?

The Yup’ik are one of the indigenous peoples of western, southwestern, and southcentral Alaska and the Russian Far East. They are related to the Alutiiq, Aleut, Inuit, and other Arctic peoples.

Yup’ik, which is pronounced “yoop-ick”, comes from the Yup’ik word yuk meaning “person” and adds the post-base pik meaning “real” or “genuine.”  So Yup’ik means the “real person/people.” Yupik without the apostrophe refers to the people of St. Lawrence Island and the nearby coast of Chukotka in Russia.

Five Yup’ik languages are still widely spoken today. With a population of about 34,000, more than 75% of Yup’ik people are fluent in the language.

The Yup’ik do not live on reservations but in Native villages. Each village is independent but many have formed coalitions with their neighbors. These coalitions handle tribal government and land management on behalf of all the villages. Individual Yup’ik villages are governed by tribal councils, made up of councilmembers who are elected by all the residents of the village.

What is a Ciayaq (Bentwood Hunting Hat)?

Traditionally, for a Yup’ik man, being a successful hunter was dependent on his ability to provide for his family and village. The bentwood hunting hat called a ciayaq, empowered the hunter and allowed him to attract the sea mammals needed as a food source.

The Yup’ik learned to make the ciayaq from the Sugpiaq and Unangan people. The ciayaq, shaped like a pointed piece of ice, helped to conceal the hunter as he floated in a white kayak among the broken spring floes. The long brim protected the hunter’s eyes from ocean spray, waves, sun, and glare off the water. 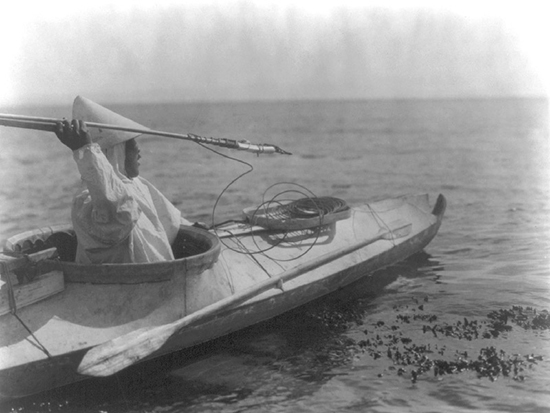 Yup’ik hunter in a kayak wearing a hunting hat, ca. 1928. Library of Congress.

Ciayaq were made by boiling wood in very hot water until it was pliable. The wood was then bent into the signature conical shape. After bending, the backs would be stitched together with sinew, baleen, or split root, and then the ciayaq would be left to harden. 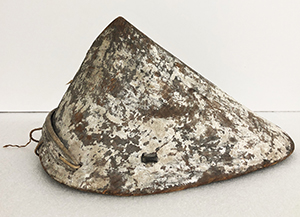 This ciayaq from the MOA collection was made in the late 1800s.

Often, there would be decorations made of feathers and walrus whiskers on the ciayaq. Hunters would also decorate their ciayaq with hunting charms carved from walrus ivory or wood. These decorations can contain powerful spiritual symbols. The patterns on the ciayaq also helped to disguise the hunters when they were out hunting.

Ciayaqs were also worn during Nakaciuryaraq (the Bladder Festival), which was an important annual seal hunting ceremony and celebration held each year at winter solstice to honor and appease the souls of seals taken during the past hunting season. Yup’ik hunters still hunt seals, but villages have not performed the festival for at least 50 years or more.

If you’d like to see examples of other Yup’ik ciayaqs do a google search using the term: yupik hunting hat.

Remember each ciayaq is unique and the designs and symbols used are important and powerful to the Yup’ik.  When decorating your hat, choose designs that are important to you.

Evelyn Corbett (’24) , Wake Forest student and enrolled member of the Curyung Tribe of the Yup’ik Nation, contributed to this post.