Prehistorians infer how ancient people lived from ruined buildings, broken artifacts, and other forms of archaeological evidence without the aid of written documents.  The earliest stone tools date back to 2.6 million years ago, but it is likely that early humans also used more fragile bone and wooden tools that have not survived.  Clay artifacts are abundant after the invention of pottery about 10,000 years ago. Prehistorians can identify the function of artifacts like these, but they also find symbolic, aesthetic, and ceremonial qualities in the objects left behind.  Prehistorians attempt to reconstruct all aspects of ancient life by tracing the distribution of artifacts and archaeological sites across the landscape.

The earliest residents of North Carolina arrived at the very end of the most recent Ice Age, over 10,000 years ago.  From that point on, North Carolina was continuously occupied by the ancestors of today’s Native Americans.  Prehistorians know very little about how the earliest North Carolinians lived, as only their large spear points have survived.  Yet, these tools are enough to show that they hunted mastodons and other extinct megafauna.  Hunting strategies and social networks shifted throughout the following Archaic Period, resulting in new spear point styles.

During the following Woodland Period, spears were gradually replaced by bows and arrows, resulting in smaller, triangular arrowheads.  Agricultural tools, like hoes and adzes, became more abundant around the same time. Though some pottery was made earlier, its use became more widespread.  Large vessels were used for everything from food storage to religious ceremonies.  These new artifacts suggest that indigenous societies were shifting toward larger villages and different kinds of social organization.

Historical archaeologists use ancient texts alongside artifacts to understand the past in new ways.  The earliest writing appeared in the Middle East about 5000 years ago.  Writing also developed independently in China just over 3000 years ago and in Mesoamerica around 2500 years ago.  Eventually, writing spread from these centers to the rest of the world. However, written accounts are not always accurate.  They can be full of inconsistencies, exaggerations, and biases.  Archaeological research complements historical sources to provide better representations of past cultures.

Spanish explorers first wrote about North Carolina in the mid-16th century.  They established a fort close to the indigenous community of Joara, near modern-day Morganton, and wrote about their interactions with the local people.  In the late 16th century, English colonists arrived on the Outer Banks. Like the Spanish before them, they recorded their interactions with local tribes.  These accounts give details about the political and economic organization of indigenous cultures, and provide a link between the tribal communities of today and the ancient cultures of prehistory.

Historical sources can give the wrong impression that indigenous societies were destroyed following European colonization.  Indigenous cultures did not disappear, but adapted to the new hardships and opportunities brought by their contact with Europeans.  Native American archaeological sites from the 17th and 18th century are full of European goods, such as glass beads and bullets.  European-manufactured tobacco pipes show that exchange happened both ways, with Europeans also borrowing practices from Native Americans.  Some practices, like maize agriculture, went on to radically transform cultures throughout the world. 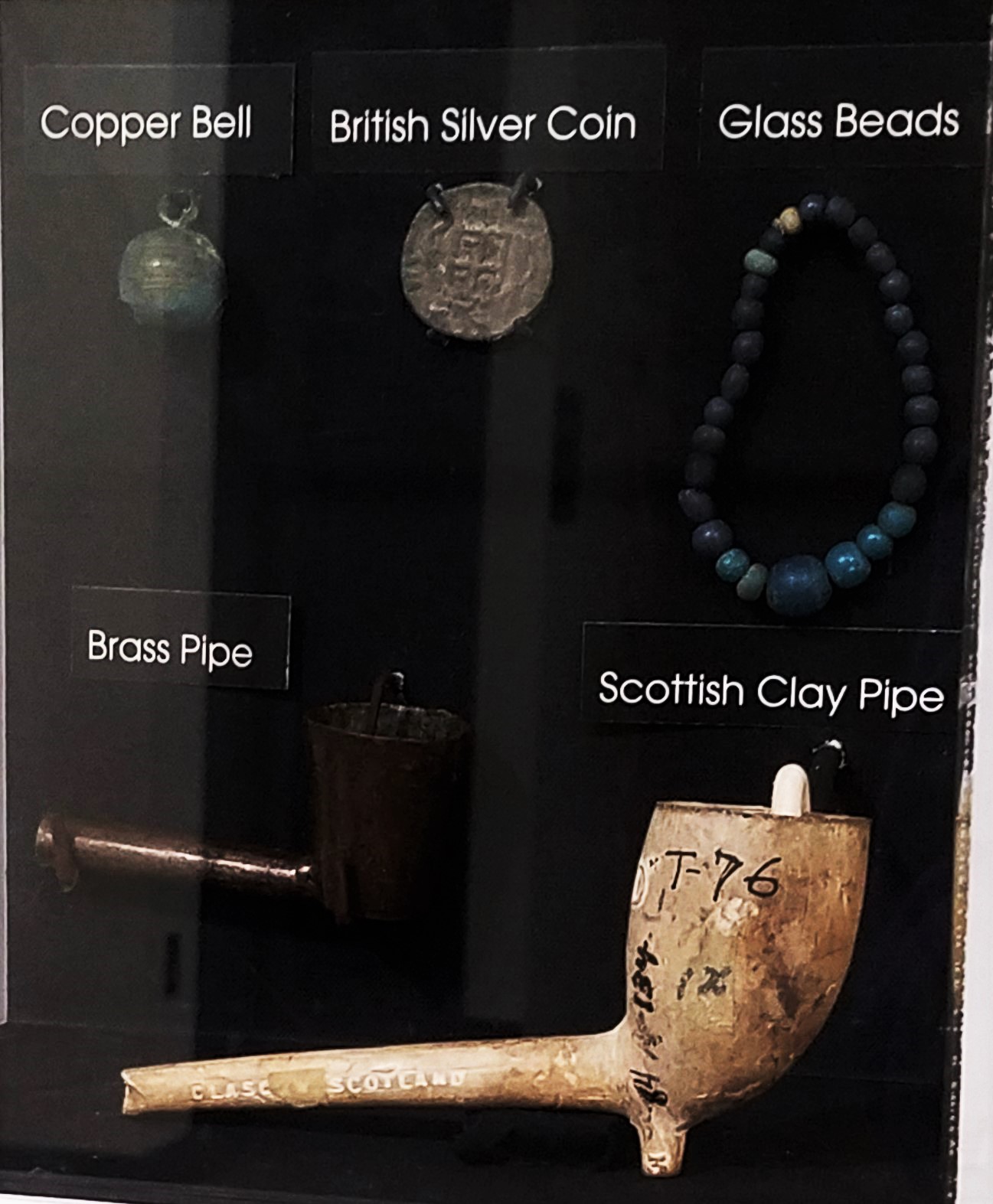 Experimental archaeologists test ancient tools and techniques to determine how they worked and whether scholarly interpretations are correct.  The goals of experimental archaeology range from figuring out the physical properties of artifacts to attempting to understand the complete worldview of ancient cultures.  A modest experiment might test stone projectile points to see if minor variations give a ballistic advantage.  A more elaborate experiment might recreate past cuisines by cooking ancient crop varieties in pots similar to those recovered from archaeological sites.  Both kinds of experiments use systematic methods of observation and interpretation to test the validity of archaeological assumptions.

The techniques for twisting and transforming plant fibers into useful cordage is one of the earliest and most important inventions in human history.  Unfortunately, cordage artifacts are rarely found in North Carolina because of the region’s humid climate and acidic soil, which causes them to decay quickly.  However, cord-impressed pottery confirms this technology’s presence in prehistoric North Carolina.  Cords, nets, and ropes were likely used in hunting, construction, clothing, and dozens of other situations.

Experimental archaeologists reproduce cordage with ancient techniques to learn how these important artifacts were made.  You can try this experiment yourself by following the instructions.  After producing a length of cordage, do you have a new appreciation for the technologies, skills, and experiences of ancient people? 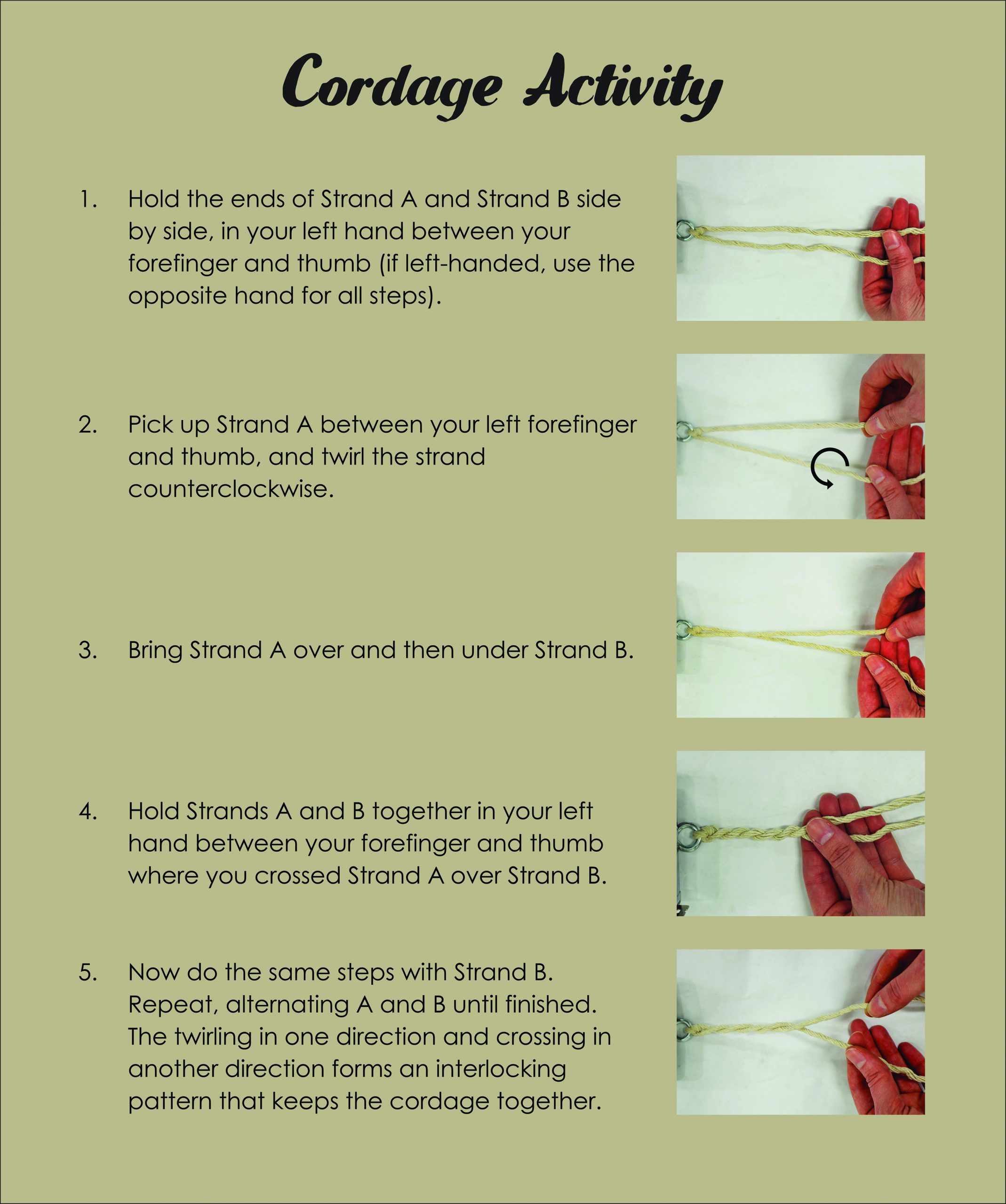