Linguistic anthropologists research language use to gain insight into the many ways humans talk about their world.  The focus of linguistic anthropology is not on the rules or grammar of languages, but instead on speech—the individual acts of talking or signing that make up communication.  Linguistic anthropologists carefully note who talks, who listens, where the speech takes place, and the events surrounding the speech.  Metaphor, ambiguity, and formality are parts of language that communicate beyond the simple content of the message.  Like other cultural practices, speech acts are influenced by gender, race, and class.

English is the most common language spoken in North Carolina.  Most local English speakers use Southern American English.  This broad dialect is distinguished from other forms of English by the use of certain words (such as “y’all”), changes in verb tense (such as using “was” in place of “were”), and shifts in vowel pronunciation (such as pronouncing “pin” and “pen” identically).  Sub-dialects can be recognized, too: Southern Highlands, Southern Piedmont, Virginia Piedmont, Southern Coastal, and Outer Banks.  African American Vernacular English is another Southern sub-dialect spoken throughout the state.

Stereotypes about language affect the way speakers are perceived.  Speakers of Southern dialects are often stigmatized and discriminated against.  A prominent study of language and cultural contexts showed that Southern speakers were less likely to be helped in New York City department stores regardless of appearance.  Even among speakers of Southern dialects, the Virginia Piedmont dialect is sometimes considered more prestigious—despite the fact that all dialects are equally capable of communicating effectively.  Historically, dialects have been banned, such as African American Vernacular English in many schools during the 20th century. Language discrimination often reinforces existing divisions in society. 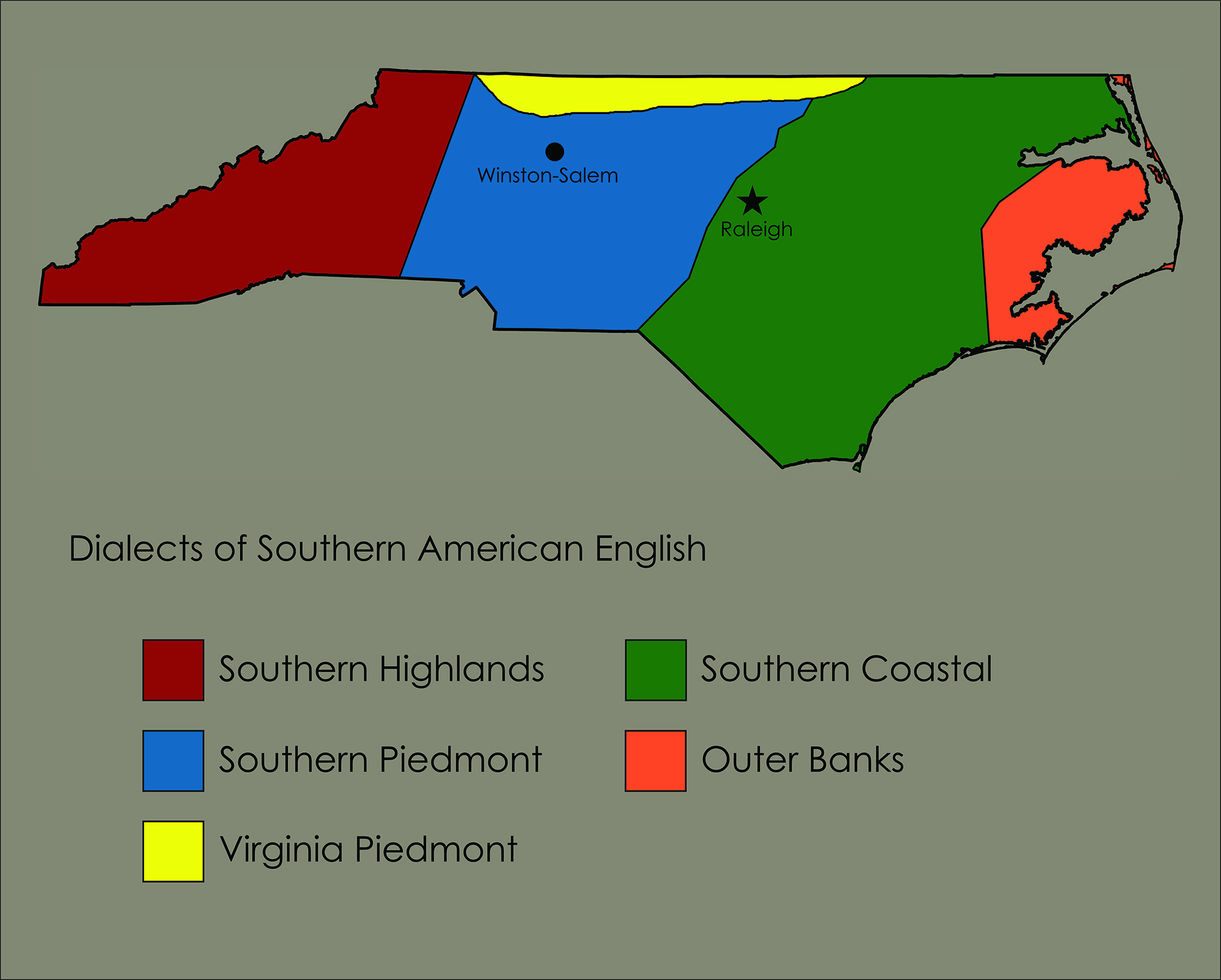 Descriptive linguists analyze the rules, elements, and variations of language systems.  Their goal is to present an accurate view of how people actually communicate in everyday interactions.  This contrasts with the ideas of grammar and pronunciation as they are often taught in schools, where the focus is on matching a particular way of speaking thought to be “correct.”  Anthropologists might further investigate why other speaking styles are “incorrect” and how this affects communication.

Languages are classified based on features such as grammar, sounds, and words, as well as their evolutionary relationships to one another.  In North Carolina, most language communities of the past 500 years are grouped in to five major families: Algonquian, Iroquoian, Siouan, Indo-European, and Creole languages formed from Indo-European and Niger-Congo bases.

Algonquian languages were spoken by indigenous communities along the Atlantic coast, such as the Croatan peoples.  European colonization displaced many of these speakers, leading to Algonquian languages falling out of use.  Cherokee, an Iroquoian language, is still spoken in the western mountains.  Tuscarora, another Iroquoian language, has made a comeback among Meherrin and Coharie communities on the coastal plain.  Catawba was spoken as recently as 1960, but like the related Siouan languages spoken by the Saponi, Waccamaw, and Cheraw peoples in the Piedmont, it is no longer used regularly.  Indo-European languages, including English and Spanish, are now most frequently spoken and are supported by the state government and education system.  Once thought to be a dialect of English, the Gullah language spoken in coastal African American communities is now recognized as a distinct blend of Indo-European languages with African linguistic features. 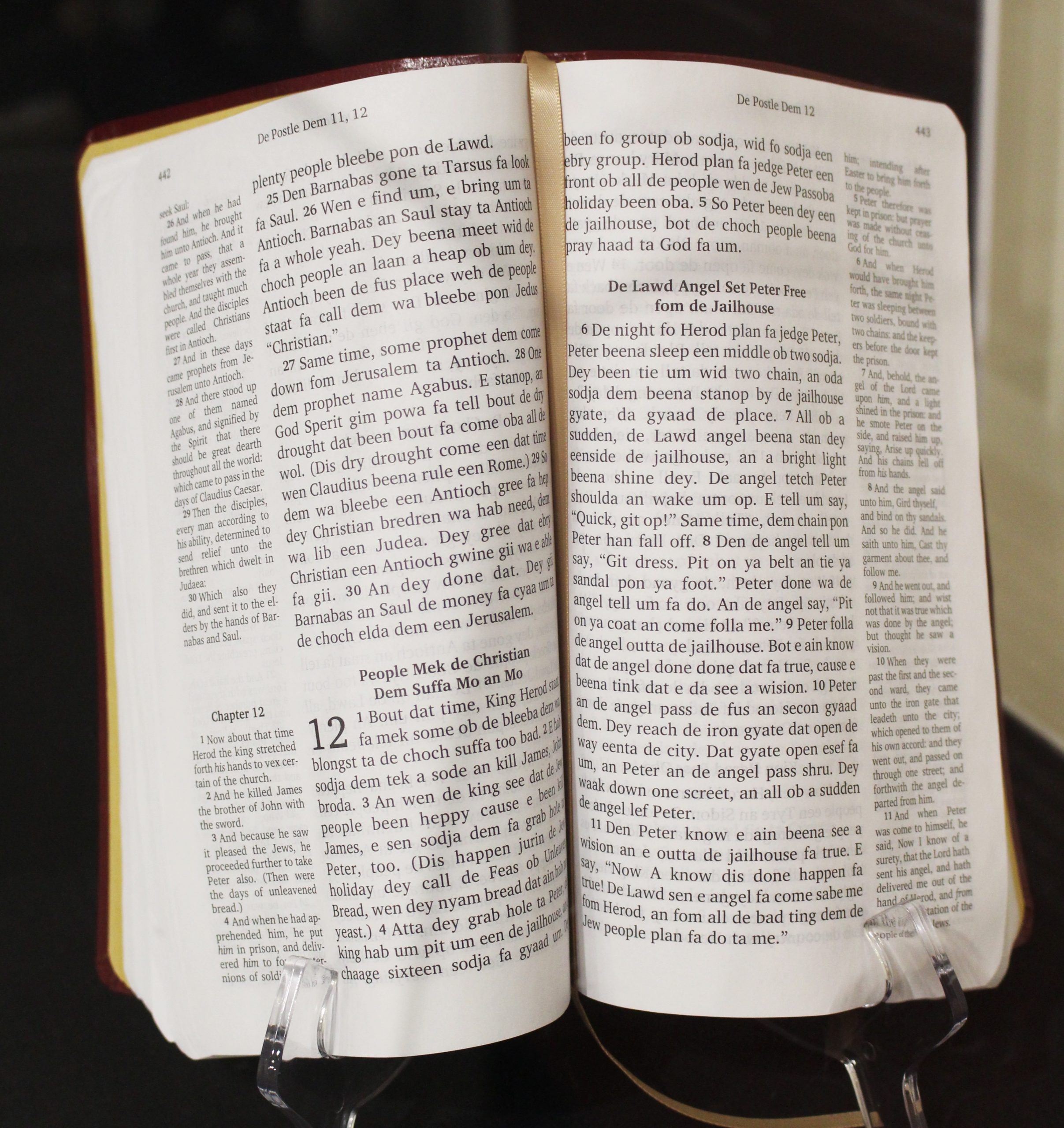 Language education researchers develop best practices for teaching languages by understanding the biological basis for language and the cultural environment in which it is acquired.  Formal language education often takes place in school.  Many teaching methods emphasize the practical and social nature of language, rather than its structure. Immersion schools are one example of this method.  They teach language by using it for all subjects.  Programs that teach language alongside culturally authentic experiences are another example.  These approaches are part of a broader trend in language education that recognizes multilingualism as a benefit rather than a problem.

An original children’s book in Cherokee is included in the exhibit.

One difficulty with teaching in Cherokee is the lack of books, worksheets, maps, and computer programs in the language.  Language educators must often develop these resources themselves.  English-language resources can be adapted into Cherokee, but this can lead to translations that don’t necessarily make sense in the cultural context.  Language educators are now developing new materials written in Cherokee, such as story books, in order to enhance the curriculum’s authenticity.