The Hmong are a northern hill tribe who inhabit areas in southwest China, Thailand, and Vietnam. In China, the Hmong are part of a larger group of peoples collectively referred to as Miao. They are often divided into two groups: White Hmong (Hmong Deaw) and Blue Hmong (Hmong Njua). This outfit is from the Blue Hmong. The Blue Hmong receive their name from the use of indigo blue dye in their clothing, which can be seen here on the bride’s pleated skirt. 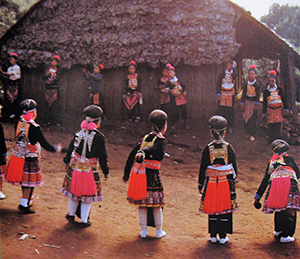 Hmong courting traditions include a game known as pov pob.  Young members of the community gather together on New Year’s to play catch. The girls and boys form two separate lines, and the girls begin the game by tossing black cloth balls to a boy they like. Anytime a girl or boy drops the ball, they must give their partner an item they are wearing. This tradition often prompts further meetings in order to retrieve the items, resulting in courtship.

The Hmong wedding ceremony is centered on the idea of showing respect. Kowtow, the act of kneeling and bowing extremely low, is used to demonstrate reverence. The groom begins the ceremony at his house by sacrificing a chicken to the household spirits. Then he and his best man kowtow to the groom’s grandfather, father, paternal uncles, and brothers, the household spirits, and finally to his ancestors. The wedding party then proceeds to the bride’s family home where the same ritual is repeated in front of her male relatives. After this show to respect, the wedding party returns to the groom’s home where for a feast in thanks to all the community members who played a role in their union.

Silver has both an economic and spiritual meaning within Hmong culture. Wealth is often held in silver and traditionally the brideprice is negotiated in silver ingots, each one is worth around $130 U.S. dollars. Silver also adorns both the bride and groom. Large necklaces like the ones you see here show wealth and status. The more silver you have, the more prestigious you are. Yet, silver also serves a symbolic purpose. The metal is viewed as a link between the soul and body which keeps its wearer safe.

The red topknot which crowns the groom’s black satin cap is through to protect him from evil spirits.

Buffalo Head Motif: Water buffalos are extremely prized in the Hmong’s Highland environment and have a high economic value. As a symbol, the water buffalo represents strength and vitality. This very stylized symbol is seen often in both men’s and women’s outfits and accessories. Look for this symbol in the bottom hem of the bride’s skirt. Here the buffalos face each other with their horns behind them. The bride’s necklace also has three large charms that represent water buffalo. She wears these to display her desire for her husband to be strong and supportive. There is also a water buffalo motif on the groom’s side bag which represents his desire to fulfill this procreative role.

Water Snail Motif: The je, or water snail, is one of the many symbols that the Hmong pull from their environment. The two spirals connected in the middle represent these snails which are always found in pairs. Look for embroidery with this design on the bride’s sash which displays her desire to find a mate and help extend her family.

Pa ndau, or flower cloth, is the stitching art of Hmong women, which is handed down from one generation to the next. This work is usually performed in a communal atmosphere and embodies the myths, history, and symbolism of their culture. On the back of the bride’s dress is a pa ndau piece sewn by the bride and attached to her jacket as a collar. This small patch consists of tiny stitches which the bride meticulously designs. It presents to the community her subgroup affiliation as well as her talent as a needle-worker.