The Javanese people, or Orang Jawa, are the largest ethnic group in the Indonesian islands. The group originated on the island of Java but has since spread throughout the archipelago. Traditionally, Javanese marriages are arranged by the parents. It is considered the final duty of parenthood to find marital partners for their children. The main considerations for a perfect match are class and religion. Today, however, self-selected marriages are widely accepted.

The wedding process is extensive and detailed. Before the ceremony begins, the couple is blessed with water to cleanse their body and soul before the union is solidified. The ceremony itself incorporates many traditions which symbolize prosperity, procreation, and unity. Today, wedding ceremonies are not expected to include all of these traditions.

Balangan Suruh: When the couple meets for the first time, the bride’s family and the groom’s friends escort them to a meeting place where they throw betel leaves at one another. The leaves ward away bad spirits and verify that their partner is really the person they are set to marry.

Sindur Binayang: The father of the bride leads the couple to their thrones, showing them the way to happiness, while the mother of the bride wraps them in a sléndang, a shawl, which is typically used to carry babies. This symbolizes the nurture she will continue to offer her family.

Timbang: The bride and groom both sit on the bride’s father’s lap, one on each knee. The bride’s mother asks him which one is heavier. The father responds that they both weigh the same in order to show that he loves them equally.

Tanem: The bride’s father sits the couple on their thrones and gives them his blessing.

Tukar Kalpika: The rings are exchanged. Sometimes, the couple already has the rings on from their engagement, but they still switch the bands from their right hand to their left hand.

Kacar Kucur or Tampa Kaya: With their family close by, the couple walks with little fingers touching to the site of the ceremonial meal. Before food is exchanged, the groom gives his bride staples such as beans and rice, as well as flowers and coins, to show that he is able to support a family.

Dahar Klimah or Dahar Kembul: The couple shares a meal to symbolize how they will now share their lives and belongings.

Mertui: The parents of the groom do not join the ceremony until this point where they are escorted to the ritual spot by the bride’s parents.

Sungkeman: To thank their parents for everything they have done to care for them, the couple kneel at the feet of each parent to ask for their blessing and kiss their feet.

The joining of two lives into one is an important theme in Javanese weddings. This togetherness is reinforced by the similarity of bride’s and groom’s outfits. Even the batik, or print design, used to wrap the lower body is identical. There are some small differences in proportion and some pieces are unique to one costume or another. For example, the bridal headdress stands out with its crown-like design and mirrors invoking the beauty of a goddess. Meanwhile, the groom’s belt includes a sheath for his traditional dagger, or keris, which is an important symbol of his manhood and class.

Both the bride’s and groom’s costumes are detailed with gold beads. Gold decorates the headpieces and bride’s shoes as well. This color is considered divine in Javanese culture. It is believed that the engaged couple become as beautiful as the divine before and during their wedding. The bride is confined the night before her wedding, and during this time alone, it is thought that a divine body visits and blesses her. The incorporation of gold into wedding costumes shows that both the community and divine powers bless the match. 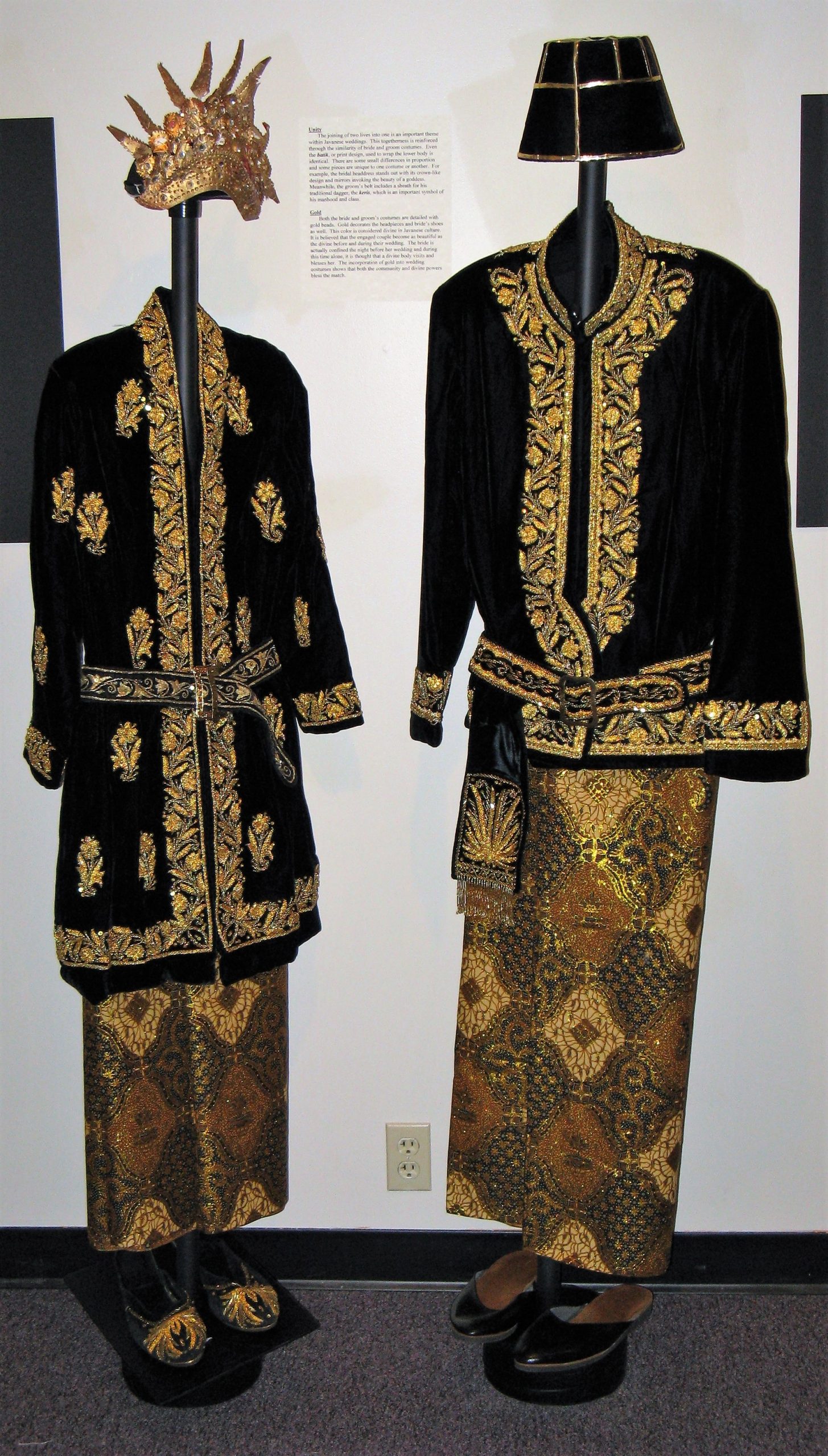